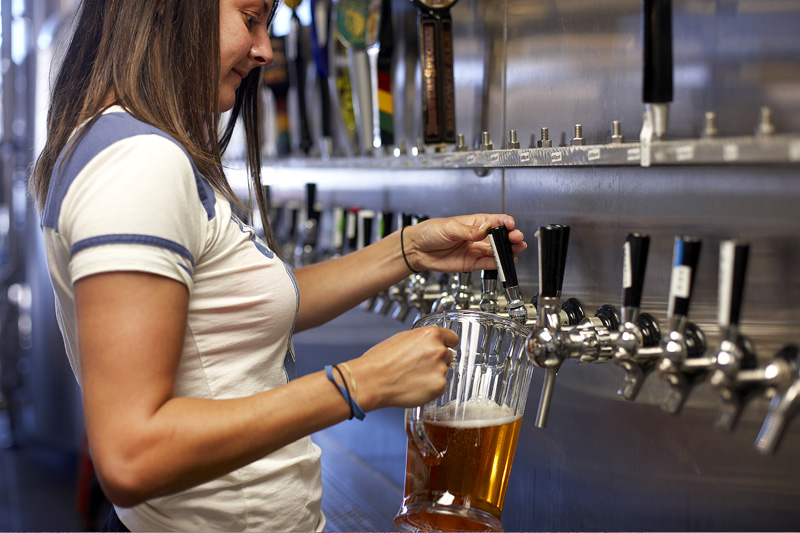 Many restaurant owners are converting to brewpubs. While the hopes of increased profits and long-term viability appeal to any business owner, the inspirations for branching out into the brewing game are varied, and go beyond financial gains. Photo courtesy Pizza Port.

A brewpub was always in the cards for Jeremy Tofte. The dream of opening one led him to sell off his thriving Jackson, WY, restaurant, Thai Me Up, to the highest bidder (literally, the transaction occurred via online auction site eBay) and use the proceeds to move to New Zealand to forge his ambition into brick, mortar and stainless steel. There was but one problem—the Kiwi suds culture was nothing like he had expected or wished to operate within. An avid surfer, he made the best of things, spending the next two years breaking breakers from New Zealand to Indonesia.

After two years of hanging 10 and downing 12 ounces of beer at a time, Tofte returned to the helm of his restaurant, which had been nearly driven out of business by those he’d handed it over to. How hard could it be to restore it to its former grace? Hard enough that keeping the now-sullied spot open required him to cook, bartend, live and sleep at his eatery, which despite his devotion was nearly empty every night.

Exhausted, but figuring he might as well enjoy the minimum of 90 hours he was putting in per week aboard his sinking ship, he sold some refrigeration units to purchase and install a 20-gallon brewhouse from California brewing system fabricator Morebeer. He used it to brew a variety of beers, the likes of which were quite rare in Wyoming at the time in 2008. It was mostly for himself, but, of course, those quaffs went on the menu. And that’s when everything changed. 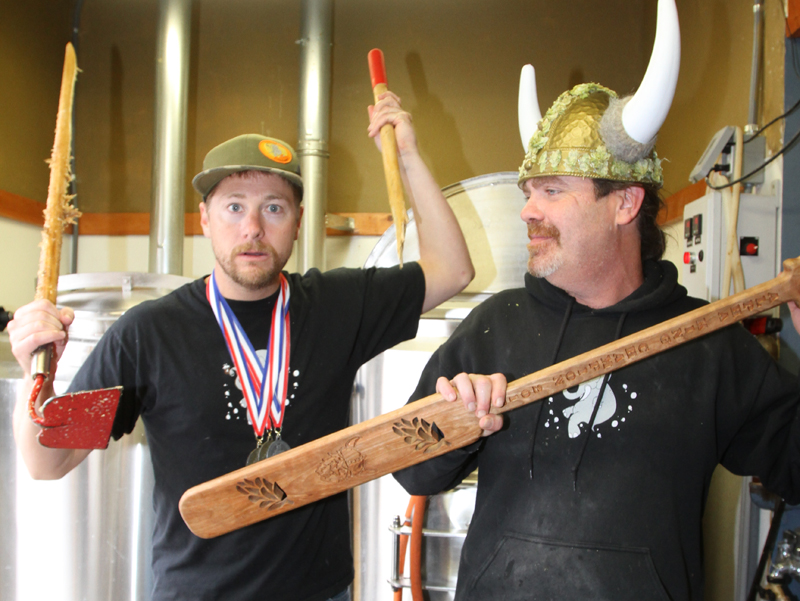 Jeremy Tofte and Kirk McHale of Thai Me UP

Word of mouth from customers impressed with Tofte’s hoppy India pale ale and other to-style offerings built the foundation for a new, highly positive reputation for Thai Me Up. The ale was right and, thus, all was right for Thai Me Up and Melvin Brewing, the phoenix that arose from Tofte’s molehill of ashes.

Tofte’s is a happy tale of redemption, to be sure, but he isn’t the only business owner to benefit from the addition of on-site brewing to an existing business. In fact, the phenomenon of established restaurants converting to the brewpub model has been on the rise over the past several years, emerging into a legitimate trend spawned by the greater American beer renaissance.

According to brewing industry trade group, the Brewers Association, the number of operating brewpubs in the United States in 2007 was 967. At the close of 2013, there were about 1,200 brewpubs scattered across the nation, a significant number of which were once cafes, bistros, grills, sports bars or other permutations of eateries sans fermentation capabilities.

“The day we opened with the word brewery on the front of the building, our beer sales quadrupled, and we have experienced those same sales from that day forward, even though we had previously been offering the same selection of [other companies’] craft beer as a restaurant and grill,” recalls Steve Morken, co-owner of THAT Brewery in Pine, AZ. “People used to say, ‘We’ve been meaning to stop in, but we always pass by and think, next time.’ Now, people say, ‘We passed by your brewery then turned around and came back.’ People want good craft beer.” 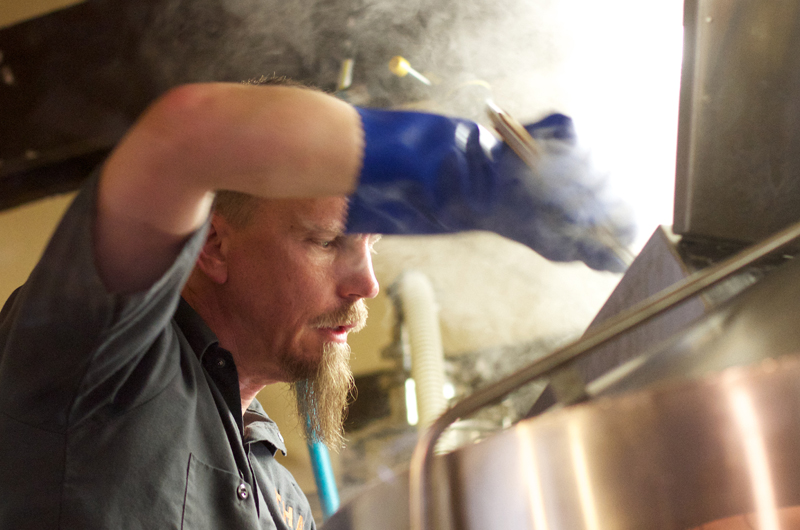 Steve Morken of THAT Brewery

Such accounts, mixed with the undeniable rising popularity of flavorful beer and a shift in tastes to locally produced consumables, provide plenty of incentive for restaurant owners to consider the brewpub model. Certainly, the hope of increased profits and long-term viability appeals to any business owner. However, in this emerging trend, the inspirations for branching out into the brewing game are both many and varied, and go beyond cold, hard monetary figures.

Some restaurateurs feel the same way about the beer they offer as the food that their chefs prepare and desire a greater degree of control over their product. Others are equal parts entrepreneur and beer enthusiast, and endeavor to produce something of high quality in keeping with their tastes or the tastes of their patrons as they perceive them. Or, like many restaurant owners, some strive to bring something to their region of operation that does not already exist, in this case, an operating brewhouse or a brewing operation providing lesser-seen or non-existent beer styles.

No matter the impetus for installing a brewing facility, all who move forward with such an undertaking recognize the appeal of local beer and Americans’ deepening thirst for a variety of flavors. “There’s been a huge and evident movement towards craft beer in the past few years. Guests are coming in and are more interested in local beers and the story of the brewery,” says Tom Janik, master brewer for Twin Peaks Brewery, the inaugural facility being built by Front Burner Restaurants, at its location in Irving, TX. “Once we saw there was a significant demand from our guests for us to start brewing our own product, company leadership started planning the launch of the first Twin Peaks Brewery.”

Scheduled to open before spring of this year, Twin Peaks Brewery will be equipped with a 30-barrel brewing system capable of producing 10,000 barrels per year. Those beers will be sold at all of the company’s Texas stores. If successful, Front Burner, which is scheduled to open 20 to 25 new locations in 2014, will explore launching brewpubs in Denver, Chicago and markets in other parts of the country.

A common thread among existing businesses shifting to the brewpub model is that the vast majority of them already offer customers a significant amount and assortment of beer. Hitting on the more obsessive end of that spectrum is An Bui, owner of Mekong in Richmond, VA. The winner of CraftBeer.com’s “Best American Beer Bar” contest for the past two years, the spot has a stellar reputation, not only for an extensive and perpetually top-grade beer inventory with more than 50 taps and a lengthy bottle list, but also for providing such a standout ale and lager experience in a city still in the initial chapters of its beer renaissance story.

Bui and his partners are working on a project called The Answer—a moniker linked to Mekong’s slogan: “Beer is the answer.” When asked why he’s taking things to the next level, Bui points to a lack of fresh West Coast-style IPAs, American pale ales and sour beers in Virginia. Once up and running, a seven-barrel system from New York’s Brewmation and Stout Tanks and Kettles in Portland, OR, will be used to give birth to what Bui hopes are “badass beers for locals to enjoy.”

“This is the perfect-sized system for a brewpub that doesn’t plan to distribute. We just want to stay small, intimate and local,” explains Bui. “We plan to have an additional 30 to 40 guest taps alongside The Answer’s creations.”

Brandon Hernández
Brandon Hernández is a San Diego-based journalist, an editor for Zagat and has been featured on the Food Network. He also is a columnist for Celebrator Beer News and numerous other national and regional publications including Imbibe, Wine Enthusiast and The San Diego Reader. He is the author of the San Diego Beer News Complete Guide to San Diego Breweries, available in stores and online. Follow him on Twitter at @sdbeernews and @offdutyfoodie.