Perk Up Your Homebrew: Brewing with Coffee 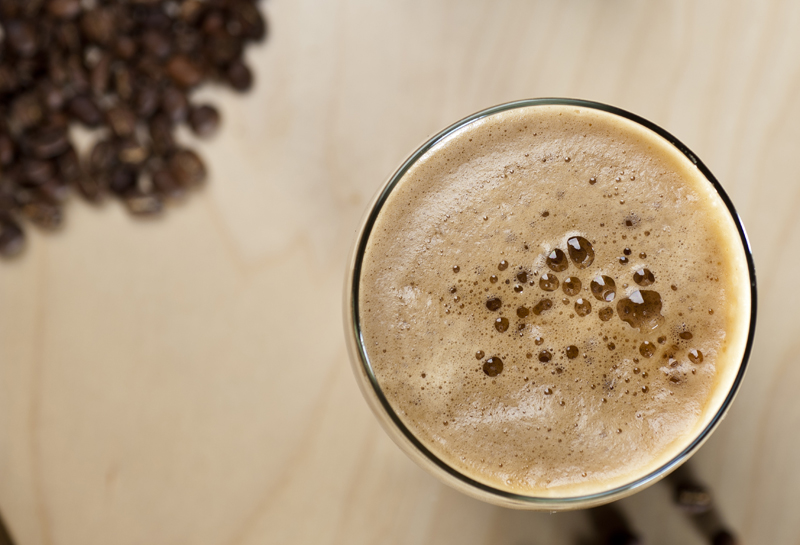 Coffee and beer are generally relegated to different parts of the day. In the end, both serve a similar purpose, enhancing the mood and purpose of the moment, sip by sip. They even share comparable paths in recent years, from mundane indulgence to culinary feature. Coffee and beer, uncannily similar in many ways, have become unlikely allies in microbrewing circles. But, given the experimental mind-set of today’s brewers and the love of hearty dark beer, it was probably an inevitable kinship.

Coffee roasts are not unlike specialty brewing grains, spanning a continuum of colors and flavors. There is also similarity between the two in production and sensory profile. Brewers now offer the best of both in coffee-infused beer, each complementing the other in a yet another enterprising and delicious exercise of nouveau brewing.

If you have ever enjoyed a coffee beer, then most likely you have entertained the idea of brewing one. The types of beer that welcome the bean are somewhat limited, but coffee options are not. And why stop at a simple java-beer fusion? That marriage can be enhanced further with other common brewing additives.

One of the most revolutionary brewing innovations ever was the drum-style malt kiln, invented by Briton Daniel Wheeler in 1817. His first product, “patent malt,” is known today as black patent malt. The kiln was modeled on contemporary coffee roasters, underscoring the analogy between well-kilned brewing grains and coffee.

Heat heightens and modifies the inherent qualities of both barley and coffee. Lighter roasts more closely resemble the raw material than darker roasts, whose charred, smoky notes overwhelm the original characteristics. Before drafting a brewing plan, investigate the color and character scales of coffee, if they are not already familiar, and compare them with dark brewing grains. This will go a long ways toward crafting a successful brew.

If we may take a bit of creative liberty, think of light roasts as substitutes for brown, Special B or CaraAroma malt, medium roasts for chocolate malt and dark roasts for black patent, roasted barley or Carafa. It’s not perfectly correlative, but is a good starting point and should get your gears grinding.

As one would guess, the most accommodating styles for coffee are dark beers like stout and porter, or perhaps schwarzbier, styles often described as expressing coffeelike notes. The roasted grains in these beers can easily mask a coffee infusion, so adjust the measure accordingly. Dark coffee will nearly mimic the roasted grains, and lighter roasts will offer a complementary component. To keep the bitterness at bay, consider using debittered dark brewing malts.

Beers that use smaller measures of roasted or moderately kilned malts, like brown ale, Scottish ale and dunkel, are also excellent candidates. The sweeter, maltier nature of those styles pairs well with lighter coffee roasts, which themselves carry caramelized and nutty flavors. Remember that it will be easier to get a pronounced coffee flavor and aroma, as there will be less clutter from dark grains.

Amber-hued brews are certainly not out of the question for a dose of the bean. Light to medium roasts in small quantities in bitters, amber ales and winter warmers might be interesting to toy with.

Coffee is pretty potent as brewing ingredients go, but relatively cheap, so there is no reason to skimp on quality. Because of the interest in specialty or gourmet varieties in recent years, decent to high-quality coffee of many types can be purchased at any regular, ethnic or natural grocery. If you want to get a bit more esoteric, seek out a local roaster and base your choice on any number of options including origin, cultivar and roast. The roaster might even customize something for you. Homebrew is very persuasive currency.

Don’t overlook blends, either prepared by a roaster or one of your own, to incorporate a range of flavor and aroma profiles. In this respect, selecting coffee is very much like putting together a run-of the-mill brewing grist. Home roasting, another hot, do-it-yourself hobby, might be the coolest and certainly the most personalized way to go.

How, then, to deliver the goods? Both grounds and brewed coffee work equally well, provided they are added at the appropriate stage. Grounds are treated as a spice and can be introduced directly, whereas brewed coffee requires a bit more effort, i.e., making some actual coffee. Brewed coffee is the overwhelming choice for professionals and also the best bet for homebrewing.

Ground coffee can be added at any time from the chilling stage onward (mashing or boiling might extract the dreaded astringency). Introduce the grounds after flame knockout, so they can steep in the kettle during the chill. Alternatively, put the coffee grounds in the primary or secondary fermenter; this will essentially mimic cold-brewed coffee preparation. The secondary fermenter is best, as it will preserve those coveted aromatics. Be careful to leave the grounds behind when racking with an offset or strainer at the end of the racking cane. Alternatively, use a fine-mesh hop bag and a coarser grind for the steep.

Brewed coffee is introduced just as the grounds would be. A lot of brewers prefer instead to make the addition at bottling or kegging time. This gives the freshest, purest flavors and aromas, as they are locked into the conditioning or maturation container.

The coffee itself is prepared in whatever manner that you usually make it: regular coffeemaker, French press or espresso maker. The French press is useful for cold-brewed coffee, which is perhaps the optimal and favored way. Don’t have a French press? Try a plain old Mason jar and either decant or filter the coffee after an overnight steep. Cold-brewing produces a smoother, less astringent beverage. Once brewed, simply dump into your fermenter, keg or bottling bucket. Scour the Internet or other resources for advice on this method of brewing if you’ve not done it.

As with any assertive brewing ingredient, coffee can be quite noticeable with meager additions and easily overdone. How much, then? This is wide open to personal preference, and to a large degree the recipe and style of beer that is being made. Experiment and keep notes on the coffee you are using, brewing specifics and amounts added to the beer. Coffee should be used as a replacement for dark malt, not as an additional ingredient.

For fresh grounds, 2 to 6 ounces should do in a 5-gallon batch, keeping in mind the strength of the beer, the roast of coffee and the grain bill. Do you want pure coffee flavor and aroma, rough roasted notes, something in between or both?

For brewed coffee, use the amount of grounds you have decided upon and make 1 pint to 1 quart of coffee for 5 gallons of beer. You could even dose some of the finished beer with a measured amount of brewed coffee until it is just right and scale it up before adding.

Coffee itself is often flavored, so why not do the same with your coffee beer? Extracts such as hazelnut, almond and vanilla (or vanilla bean) would work quite nicely. For some spicy complexity, try cinnamon, nutmeg, cardamom, anise, ginger, orange peel or mint, alone or in combinations. A festively spiced robust stout would be a real winner for Christmas.

For something that blends coffee and sweetness, try a coffee milk stout, made with lactose, or a rummy sugar such as brown, piloncillo, jaggery, turbinado or demerara, or a varietal honey.

My favorite partner for coffee is chocolate or cocoa nibs. Nibs fairly resemble medium-roast coffee varieties, bitter with an oily mouthfeel, yet full of original character. This particular pairing offers that rugged, earthy depth that we crave in porters and stouts and their requisite dark malts. Chocolate is far milder than nibs, and will temper even the darkest roast coffee rather nicely. Chocolate is also a nice complement to some of the spices mentioned above.

Add to secondary fermenter or at bottling: 32 oz fresh-brewed
coffee made with 5 oz dark roast (Vienna, Italian or French)

Collect 6 gallons of first runnings in kettle 1, then reinfuse the grain and collect 12 gallons of wort in kettle 2 with normal sparging

Kettle 2: Dry Stout (10 gallons, OG 1.044, 25-35 IBU)
Devise a hop schedule and select yeast to approximate an
Irish dry or American stout, using aromatic and flavoring hops
to your own tastes