On the first episode of the new Beer Travelers podcast from All About Beer, we start where it all began for our host Andy Crouch, his hometown of Chicago. And Andy has two of the best to help guide our exploration. Nik White and Chalonda White represent two of the freshest voices in craft beer. Chalonda, better known as Afro Beer Chick on social media, is a force of nature and her husband Nik is an old school Chicago beer guy who co-runs Chicago Beer Pass. Together, this dynamic husband and wife team are about as knowledgeable about their local scene as anyone we can think of.

We discuss all the great Chicago breweries, where to get the best lagers, IPAs, and sour beers.

As a kid, I sent away for every travel brochure I could. I called every 1-800 number that popped up on the television screen, filled out tear-off magazine vacation kit cards and mailed them in, and grabbed vacation brochures from local travel agencies. Alaskan cruise books, Parisian hotel brochures, Chinese monument guides—I collected them all.

I’ve always been passionate about travel even if it wasn’t something I did much of as a kid. My family took the occasional trip, usually to a familiar, family-friendly venue in Florida for spring break, but we never really traveled. We never really explored distant places or immersed ourselves in foreign cultures.

So as an adult, I set out to rectify that. I’ve done backpacking trips through Europe, and spent days and weeks in countries from Cambodia to All along I tried to get to know and understand the places I visited.

And one of the key factors in my travel, one that has always opened doors for me around the world, is beer. From Tokyo to Austin, Montreal and many places in between, beer people share an undeniable and symbiotic love and passion, one that draws them together despite cultural or national differences. It works as a valuable bridge between different people, all of whom share a love of the product, which is a powerful unifying force.

Travel shows us the world while expanding our own selves. Whether it be to a taproom in your hometown or a brewery across the globe, traveling to the source of where a beer is made and served fresh and meeting the passionate people behind the beautiful beers reveals its soul.

With nearly 10,000 breweries in the US, and countless thousands more around the world, it can feel next to impossible to figure out where to go. That’s where the Beer Travelers podcast comes in. Each episode we’ll take a deep dive into a local beer scene, highlighting its best breweries, taprooms, and local wonders. And I hope we’ll leave listeners feeling as if they’re locals equipped with a plan of where to have their next pint.

We’ve all spent enough time at home on our couches ticking off new beers; it’s time to get out and explore the greater world of beer.

And this week we’re starting where it all began for me, my hometown of Chicago. And I have two of the best to help guide our exploration. Nik and Chalonda White represent two of the freshest voices in craft beer. Chalonda, better known as Afro Beer Chick on social media, is a force of nature and her husband Nik is an old school Chicago beer guy who co-runs Chicago Beer Pass. Together, this dynamic husband and wife team are about as knowledgeable about their local scene as anyone I can think of.

For loyal podcast listeners, you may recall that I interviewed the pair in February 2021 for my other podcast, the Beer Edge. I’d recommend giving that episode a listen as it’s a rollicking good time that also hits some serious notes. In this episode, we dive deep into what makes the Chicago beer scene special and where you should go for your every beer need.

So welcome to the first episode of the Beer Travelers podcast from All About Beer. 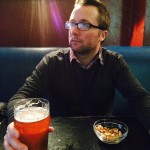