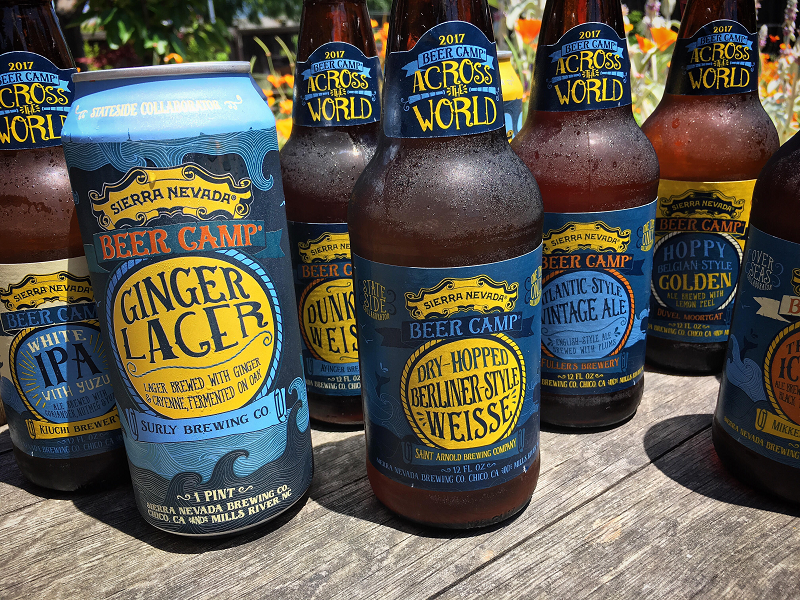 Sierra Nevada Brewing Co.’s new Beer Camp Across The World 12-pack is landing on shelves across the country, and samples recently arrived to our NorCal office for an early taste.

This year’s set features 12 different collaborative releases: half with U.S. breweries, half featuring international ones. The flavor profiles tend to lump into three flights of four: four lighter-impact oddities to start, followed by the hoppy stuff, and lastly, the four malty ones. They were tasted as such, with breaks between. Given the dozen different beers to roll through, we’ve kept things tidy with three-sentence reviews and judged in accordance with the magazine’s tasting criteria (Highly Recommended, Recommended and Also Tasted).

Overall: some tasty collabs, especially the Tree House one, with occasional bouts of sweetness.

Beers No. 1-4: The Palate Gauntlet

Almost like spicy ginger candy. The subtle cayenne spice isn’t quite enough to make up for the candied feel, and hints of oak seem to amplify that sweetness. Not quite refreshing.–Also Tasted

While finding its inspiration in Thai iced tea, the star anise gives this a major licorice focus in aromatics and flavor. The lactose, while steering towards creaminess, never quite gets there. So much anise.–Also Tasted

A lightly boozy sundae, with plush and fruity alcohol to start and excellent raspberry character. The cocoa’s like occasional chocolate chips, adding a layer but not making things feel heavy. This feels more like a Bruery beer. –Recommended

Beers No. 5-8: The Hoppy Wheelhouse

Here we go. Yuzus are an aromatic Asian citrus fruit, and they tend to fit pretty well in hoppy and sour offerings. The spice additions here don’t overextend themselves, and a well-expressed barrage of hops (Centennial, Citra, Comet, and Eureka!) offers plenty of citrusy bitterness and tree fruit. –Recommended

Perhaps the most-anticipated beer in the box—offering collaborative access to Tree House’s juicy reknown. While it pours clear, that plump, late-addition hops barrage is what folks will be looking for. Pomelo, pith, lots of smooth hops. –Recommended

This one lands a bit heavy on the honey-lemon. The combination of high carbonation and intense bitterness (well past tripel levels … ) makes this challenging to settle into. Honeyed, tasty, generously bitter—but there are more relaxed versions of this profile.–Also Tasted

This DIPA includes farm-distilled hop oil along with Centennial, Citra, Mosaic and Simcoe hops. The net effect? A traditional mega-hop framework that feels like an amplified version of Hop Hunter. –Recommended

I personally had the highest hopes for this one, and it’s, for certain, a respectful take. Plenty of cola, brown sugar and bubble gum throughout. A bit heavy with the esters, but refreshing and a good gateway dunkle weisse. –Recommended

This is one of the bottle-conditioned options—probably better suited for aging than anything else in the box. Right now, it’s mostly focused on red fruits. Don’t be afraid to let this one cellar and bring out some caramel/sherry, as that’s the missing piece.–Also Tasted

A blend of recreated batches of Sierra Nevada’s Bigfoot and Avery’s Hog Heaven that is then bottle-conditioned. This one offers significantly more space to explore versus the Vintage Ale, especially from its hops. More than the sum of its parts: fruity, bitter and interesting. –Recommended